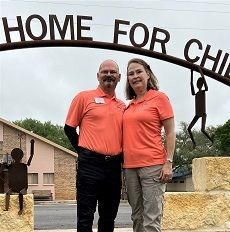 Linnette Fike started as the Comptroller in May 2019. Linnette grew up in nearby Llano county and knew about the good work of the Cherokee Home from a young age. She went to college at Angelo State University, where she met her husband, Rod Fike, who grew up in Burnet County and was also familiar with The Home. They were married in San Angelo and then moved to San Antonio and completed their degrees at UT San Antonio. Rod & Linnette lived 13 years in San Antonio and then 12 years in Houston, before moving back to the Hill Country.

While in the big cities, Linnette worked at firms such as USAA and Buccaneer Energy, where she developed skills in Accounting, Human Resources, and Investments. She and Rod were also active in their local churches, being involved in the children, family, finance, and marriage ministries. They were both on the Board of Directors for Lilia’s Place, a ministry in Cebu, Philippines that has established a church and a school.

Prior to working at The Home, Linnette worked at Todd Keller CPA in Llano as the Office Manager and performed payroll and bookkeeping duties. Linnette sees her role as Comptroller as a mission, not a job – a way to use business skills to serve kids and further the Kingdom. Rod also volunteers at The Home on a regular basis. Linnette is also very active with the Llano Animal Rescue, where she regularly loves on dogs that are looking to be adopted, and she serves as the Treasurer too